On The Madonnas of Echo Park 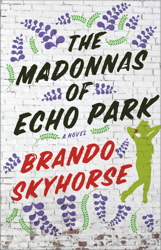 Brando Skyhorse’s debut novel is the author’s attempt to capture the unique culture, history, and changing face of one of Los Angeles’s most storied (and oldest) neighborhoods, Echo Park. Site of the Battle of Chavez Ravine and home to tens of thousands of Latin American immigrants after World War II, Echo Park has recently become one of the city’s most gentrified districts, resulting in a lamentable displacement of families and deeply-rooted memories. The Madonnas of Echo Park is in some senses both a love song and an elegy in response to this transformation: it preserves and celebrates the vibrancy of community, while at the same time acknowledging (and lamenting) the march of time that continues to shape its present.

The book is populated with a handful of characters, each a resident of Echo Park and each with their own story. A reader will meet Hector, a day laborer and illegal immigrant who is asked to make an inescapable and life-changing decision; Beatriz, an elderly woman who has a miraculous encounter with the Virgin Mary; Felicia, a domestic worker who complains about her troubled relationship with her daughter, Aurora; Efren Mendoza, an anti-immigrant bus driver who witnesses racially-motivated mob violence on the job; and the ex-con Freddy, who upon release from a long stint in prison races back home only to discover how much the barrio has changed. Memory, miracles, mystery, and tradition all intersect within the novel’s pages, and Skyhorse successfully creates a literary mural of Echo Park.

The sense of community is strongly represented in The Madonnas of Echo Park, owing chiefly to the structure that Skyhorse has employed. Although the book is billed as a novel, it is in actuality a collection of interrelated stories. While each story stands individually, characters reappear in each other’s stories in delightful and surprising ways. Each voice brings to the novel a different perspective on the neighborhood, ranging from Efren’s vociferous complaints about the influx of “illegals” to Freddy’s quiet recollection of long-departed neighbors, some of who are former romantic trysts. Moreover, the stories are linked by a common event: a senseless drive-by shooting that leaves a little girl dead affects the life of each and every character in some way. Each offers his or her response to the tragedy, and each story gives the reader a glimpse into the emotional complexity of the individual as well as the community at large vis-à-vis the shooting.

Despite everything that there is to praise in the novel – and there is much to admire – there are stories do not feel entirely authentic. What contributes to this is the fact that every story is written in the first-person, a choice that many writers find limiting. Take, for instance, the case of the elderly Beatriz. Though her character clearly has a long history in Echo Park that stretches back to the Californios and though there is no mention of Beatriz pursuing any type of formal education, Skyhorse’s choices in diction do not match his character’s experience. She uses insults such as “sniveling cur” and describes her uncle’s screaming as “contralto shrieking,” language that doesn’t fit the reader’s perception of the persona and experience of the character. One frowns many times throughout the novel at these moments of linguistic inaccuracy and wonders if the stories wouldn’t be more convincing had they been written in the third person, liberating the writer from these types of concerns.

And yet, one must honor the heart behind Skyhorse’s book. In the foreword he writes that every character is based on actual Echo Park residents, and says that these are “their real voices.” Despite its imperfections, The Madonnas of Echo Park certainly leaves the reader with an impression that the author genuinely cares about his characters, and a portrait of a neighborhood that is disappearing far too quickly.