There were no toys and no videogames, no salty pork rinds or soda to wash it down with. He was missing his favorite cartoon, a series about mutants and monsters collaborating to save the planet from doom. The television blabbered on about the developing situations in places whose names the boy could not pronounce, let alone repeat. Bored, he stretched out on the couch, which was still wrapped in its factory plastic, and made himself more comfortable. Sitting quietly in the armchair near the window, nursing a cup of water, his mother said nothing when he sighed aloud. She looked at the television the way one stares at something that is slowly fading away over the horizon, pained at the moment of its loss.

Are you hungry? she asked him for the third time. She shifted on the armchair, placing an elbow on either armrest. Your grandmother says the food will be ready soon.

The boy didn’t answer. Instead he again took in the familiar dead eyes staring back at him from his grandmother’s shelves, framed for all eternity. He had not met any of them, and yet all his life the boy could remember these faces of relatives he could not name and knew only by stories his grandmother would tell. That man in the wide-brimmed hat was his grandmother’s father. The fat lady in the tight red dress was his great aunt. And the baby, not yet old enough to say mamá, was his nameless dead infant uncle. The boy could never quite understand how it is that his uncle never knew that he would have a nephew, never even had the consciousness to know that his parents didn’t want to name their sickly lastborn child.

The only face he recognized was that of his grandfather, whose first name he shared. The boy would always remember that the teacher that day three months ago had a cold and was wearing a loose purple blouse with the peace sign embossed on the front. She was taking roll, and right after she called his name was when the secretary walked in and handed the teacher a slip of paper. (Later, guiltily, the boy remembered that he had hoped he would be pulled out of class that day like his mother sometimes arranged whenever she said she could not bear to be alone the entire morning. And so sometimes he sat playing videogames or watching the cartoon channel while his mother sat at the kitchen table in her nightgown, sometimes until lunchtime.) On that slip of paper was the boy’s name, and he gathered his things and walked out into the somber courtyard to see his mother, her face holding a smile like she didn’t want it to fall flat on the dead grass below. When she reached out to him and with both arms clutched him to his chest, the boy started crying right there in the school courtyard. For a moment he didn’t care that his friends might see him from their classroom windows. He wept into his mother’s tobacco-scented sweater not only because his grandfather was gone. He wept because this was one more blow to his already wounded mother: first his father had run off with that other woman, and now this. This is what the boy remembered taking in the album of deceased relatives displayed on the living room shelves.

There was no pizza, no chocolate pudding. His grandmother instead made creamy canelones with bacon and had prepared a macedonia, the fruit miraculously cut up into perfect little squares and crescents despite her heavy gray hands. The boy was hungry, and when his grandmother, wiping her cold hands on her kitchen apron, finally called him to the table, he stared at the plate in front of him. His mother sat opposite him and next to her was his grandmother. He thought of complaining and asking his mother to instead get a kebab for him from the bar downstairs but seeing both women silently begin to eat made him reconsider. He quietly ate half of the canelones and all of the macedonia (it was sweeter than he had imagined) and this seemed to keep his mother and grandmother from scolding him. When he was finished, he left his plates in the sink and said he wanted to go down to the plaza and sit in the sun a while. His mother, scraping the bread crumbs from the table, didn’t object.

Downstairs, the summer had finally arrived. The boiling humidity of August was still a couple of months away. The wind was still cool and the sun did not yet redden winter complexions. To his left was the parking lot which was full since it was a holiday in Spain that day, and to the right, past the furniture store and the Western Union, was the plaza. An old woman in a red sweater sat resting on a bench under the shade of his grandmother’s building, pulling up her stocking. 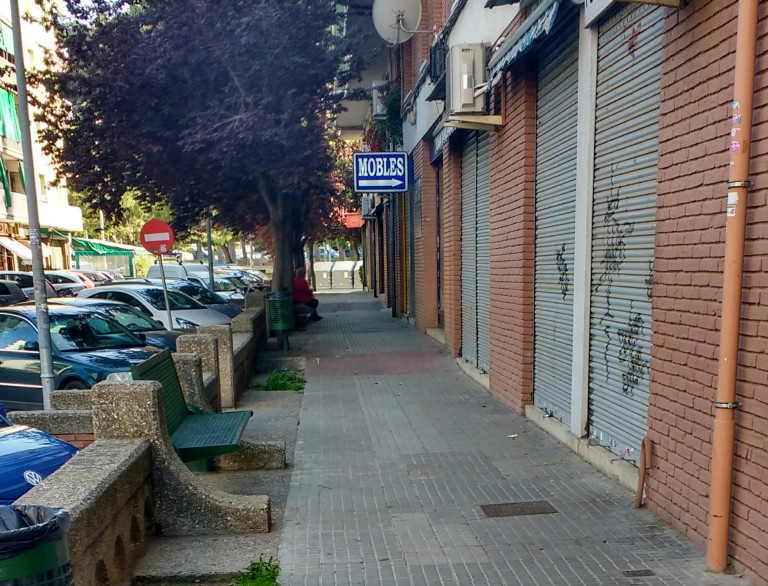 He walked along the dirty asphalt toward the plaza, avoiding the piles of dog shit spread out like mines. The old lady on the bench looked at him as he passed by and he had the sensation that she continued looking at him even after he’d crossed the street. He felt her eyes on him, he was sure, and walked quickly into the waiting sun, certain the light would cut off her reach.

There were other boys in the plaza, idly passing a soccer ball to each other with half-hearted kicks. They were a bit older than him and he didn’t recognize them from school, so he walked past them too until he reached a bench in the opposite corner. He sat on the warm steel, and let the sun warm him. He closed his eyes. A car roared by in the distance. A man was arguing with someone about directions somewhere behind the boy. The smell of roasting pinchos from the bar. The boy stayed there with his eyes shut, shutting out the thoughts of his father rising up to him like seaweed from murky moonlit depths. Because for him, there was nothing that he wanted to think about more, but could not allow. There were some things, after all, that man should never talk about.